In February 1968, the Mother read out a Charter to mark the birth of this new city aimed at human unity, across a barren plateau where people from all over the world had gathered. It was called the City of the Future, a Universal Town, the City of Dawn. It was named after Sri Aurobindo, a place that would mark his evolutionary work and vision, now being carried forward for humanity. The city plan, the physical catalyst of this experiment was also presented before the world on that day.

The first fifty years have seen some major achievements but much more remains to be done to fulfill its aim as a model city. Many elements that have been lost or forgotten over the years are needed to bring this adventure back to life and realization.

As the next fifty years start, this is a space to take a step, back to the future, and re-discover the key elements of this city and its plan, as a distinct experiment that the earth needs and see what still needs to be done… 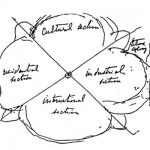