Always the same Will is at work. The Force is there awaiting the possibility to manifest: we must discover the new form which will make the new manifestation possible.

Though most cities are not planned, there are a large number of planned cities across the world, both ancient and modern. Some have an enduring beauty, some are able to adapt with change while some have shown us their mistakes. All these are things to learn from.

Most planned cities deal with land use and zoning, in some cases, form, or with density, mobility, water, environment, infrastructure and so on. Auroville’s planning must address all these things and yet it has a starting point which it cannot ignore.

New forms are needed for the manifestation of a new Force.

Form is not just about function. A rectangular plan with the usual straight roads and usual parks and zones was rejected by the Mother. She was looking for a new or different form which would have the capacity to fulfil another kind of function in all its layers: to be a conscious catalyst for human unity.

Would such a city start with the usual down town and city centre? Would it have traffic honking all around it? Would it be rigid and compartmentalized? Would it be packed with concrete?  She ‘saw’ this city before us all, before the architect even, nudging his efforts and errors through different models till she signed, sealed, delivered the final one for all humanity, fifty years ago, surrounded by a greenbelt.

In the empty centre, Auroville’s unique downtown was placed a few years later which sets the tone and correspondences for the rest of the city.

Auroville wants to be a new creation expressing a new Consciousness in a new way and according to new methods.

She worked with the architect for nearly three years to achieve the form and the plan she wanted – a wide cradle given over to us to experiment everything: economy, energy, organization, education, culture, architecture, environment, water, mobility, streets, food, people – its movement an evolving, interdependent unity emerging consciously. 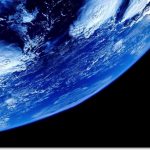 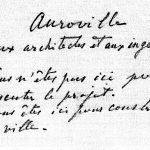