Need for a Re-view

As earlier posts reveal, Roger Anger and his team were working with the ‘givens’ they received from the Mother, their ‘client’ and with the vision parameters set by her for a city that would be both spiritual and material.

Though top professionals, they did not challenge her ideas for this experiment but were clearly working with her demands, within problematic ground reality conditions handed to them and, with what was technically possible and available at that time.

There was also a clear understanding that methods and techniques would be updated with an evolution in techniques, materials and conditions.

The directions indicated from 1965 to 1968 and later, regarding energy, water, materials, mobility and urbanism, greenbelt and bio-region were far ahead of any other experiment, at such an integral scale at that time. Today it is easy to match many of those ideas with what is being adopted as conscious and progressive planning around the world over the last 10 to 15 years.

Why this work was opposed, put aside or delayed is also something that needs re-view.

As Auroville works with a Charter, the ‘divine consciousness’ will certainly remain the ‘client’ and as long as it has to.

Auroville’s Mobility works together with its plan layout and intention. We explore how these ideas emerged, developed and were progressively detailed, either by the chief architect and his early team via their ‘client’ and later, with teams at Aurofuture, or through studies had his approval.

Those ideas and the work that went with them remain relevant and call for a reality check. Are we in sync? Are we doing just the opposite? Do people walk or cycle to work naturally? How would an alternative collective transport system make the city more sustainable? What was the intention and how far do we still need to go to bring our reality up to sync with the Dream.

To re-view the original process and decisions in order to move forward is not a dogmatic exercise but about informing ourselves to make the right choices as we plan ahead. It is well known that once a city plan is approved and set in motion, it needs to remain on the table to maintain professional and practical continuity for development, specially so, as it applies to an experiment like Auroville which remains without precedent in the world.

…in the specific case of Auroville, its centre must be as far as possible from all major axis of circulation, due to the presence of the Mother’s Pavilion in the Park of Unity.

*The Park of Unity must be surrounded by a sort of isolating zone so that it is aloof and silent. Accessible only with permission.*

The mobility principle in Auroville must be defined right now.

Shall we allow the presence of cars? Probably in just a few years India will know, same as Europe and the US, the major urban problem the automobile is. The reign of cars has conditioned the urbanism of the 20th century and continues to tyrannize it. Although outdated, and everybody knows it, still the automobile strives at its best to create hell inside the cities and kill the outskirts. Therefore the option to follow is to forbid and suppress the usage of this means of transportation within the town – and replace it by another, more hygienic, less cumbersome and noisy, more aesthetical, maybe newer if possible.

The urban area is seen as predominantly pedestrian, within a compact, walkable, town area, to be made possible with a shade architecture (not concrete masses as often judged) offering easily walkable connections of destination and human contact ‘within the ring’:

R: Auroville will attempt the rehabilitation of streets, a change from the rush-ways to a satisfying and happy system of circulation.

We will create a shade – architecture (a must in a tropical climate) that will allow for undercover traffic and sudden bursts of light within patios, elevated gardens…

Q: Would you like to take us on a fictional pre-visit to Auroville… by car?

R: towards the residential sector – huge parking areas await us since no cars run within Auroville.

The dot at the centre represents Unity, the Supreme; the inner circle represents the creation, the conception of the City; the petals represent the power of expression, realisation.*

Marking the Crown was first attempted in the mid-eighties. It is yet to be achieved.

The Crown is the main avenue, situated half way between the centre and the outer limit of the city. It is intended to be a circuit of encounter, interaction and communication. Here the progress of the life in the city will be reflected. It will be the pulse of Auroville.

The avenue is the link between the four zones, connection the main public areas in each. The character of the Crown will change as it passes from one zone to another (and its parks).

Taking into account the concept study, based on ecological aims, by the German traffic specialist, Hans Billinger, who was consulted by Helmut, Aurofuture re-interpreted the information to prepare a study closer to the ground, approved by Roger.

Auroville, to be true to the Mother’s vision, will provide alternative forms of mobility to suit the needs for peaceful conditions throughout the city area. Today’s type of environmentally polluting, hazardous and high-speed motorized transport will no longer have its predominant, overbearing position – the individual will regain his own spatial dignity.

The indications given by the Mother (four zones) for an experimental town favouring the evolving conditions for man has been translated into the concept of the Galaxy.

12 radials, connecting the Crown to the Outer Ring Road, are the dynamic representations of the Mother’s plan.

The shape of the Galaxy has the following inherent advantages:

The layout of Auroville is ideal to develop a pedestrian friendly city.

Within the city area pedestrians will have priority. Cyclists will be allowed where they do not disturb. Access for vehicles for service and deliveries to be allowed at specified hours. Cars and motorbikes to be permitted in case of emergencies. Only those with disabilities will use motorized vehicles in this area. Motor vehicles and public transport will adjust to a slower speed of 10 to 15 kmph in the general city area.

Main areas for parking would start at the outer periphery of the greenbelt and be phased out in succession until the Crown was reached.

Cornelia Dinca / Is Your City People or Cars?

Charles Correa on the necessity of well planned mobility 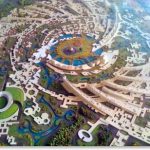 Rehabilitation of the StreetAuroville City Planning